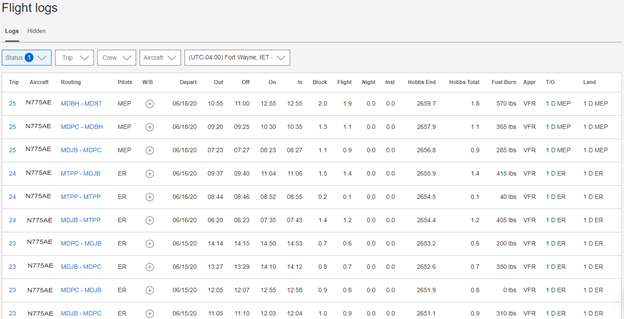 Flight logs new page is where the user will be able to go and search all flights that were created as a trip and were, therefore, flight logged. The flight logging could be made from the Schedaero Crew App and the Flight Logs New Page. In case the user needs to go and correct any past flight log, they will be able to edit and make changes within their permissions.

The flight logs page can be filtered by:

Trip: Users can search for the specific trip number.

Crew: The user will be able to select all the flight logs that were assigned to the specific crew member.

Aircraft: Users will be able to search for all the flight logs that were created and were assigned to that specific aircraft.

Time Zone: User Should be able to see the inputted times in the desired time zone selected.

The user will be able to complete or edit their flight log information.

Trip number, departure + destination + regulation under which they were operating. 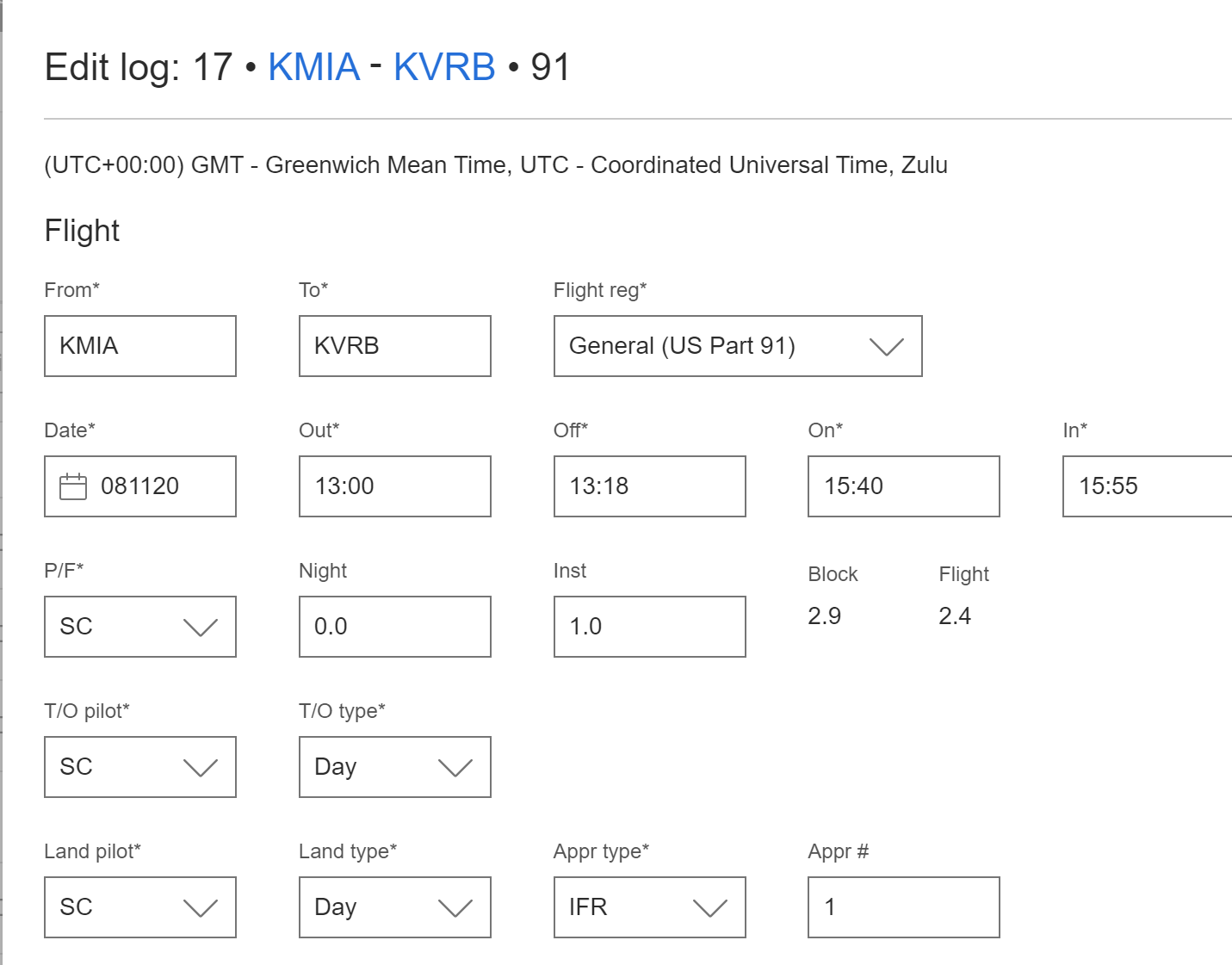 Flight Reg*: The flight regulation in which the trip was scheduled.

* The User is allowed to switch at any point, the airport departure, arrival, and flight regulation.

Date: The date the flight the event took place

Night: Any time that this flight occurred under night conditions.

Inst: Any time the fight was conducted under Instrument Flying Rules.

Block: The total time since the aircraft was under its own power.

Flight: The total flight times, between Wheels up to wheels down.

T/O Pilot: The pilot who performed the take-off.

Land Pilot: The pilot who performed the landing.

App Type: If the approach was conducted under Visual Flight Rules or Instrument Flying Rules.

Appr #: The number of approaches that were conducted.

These options will auto-populate once the user performs the accurate flight logging.

Name Name of the crew member.

Position: Position in which the crew member was flying. Pilot in command or Second in Command.

Block: The total time since the aircraft was under its own power. These times will auto-populate.

Night: Any time that this flight occurred under night conditions. These times will auto-populate.

Instrument: Any time the fight was conducted under Instrument Flying Rules. These times will auto-populate.

PIC Hours: If the crewmember has any PIC time, it will be shown here. In addition, the user can make changes at any time here.

In this section, the user will be able to add the fuel information as well

Aircraft: Aircraft registration number, in which the flight was performed.

Fuel Added: The amount of fuel in pounds, added before the flight.

Fuel Start: The total amount of fuel in pounds, that the flight started with.

Fuel End: The total amount of fuel in pounds, after the flight was completed.

Fuel Burn: This calculation will auto-populate. It will calculate the difference between Fuel start and fuel end in pounds.

APU Cycles: Auxiliary Power Unit, cycles. Cycles are defined as APU engine start, a takeoff a landing, and a shutdown.

In this section, the user will be able to record or edit the Engine hours and cycles.

Engine # Hours: Engine Hours, the time the engine was operational. Starting to Shut down.

Reset: When a Flight log is completed, but there needs to be a change made to the scheduled itinerary. The user can Reset the flight log to set all values to 0. Prior to taking the action, we recommend the user to take a screenshot of the flight log in case a value inputted prior is needed.

Cancel: Cancel any updates the user was currently inputting in the flight log.