Learn how to add simulator and other Ad Hoc flight logging through Schedaero.

Pilots who want to add any ad hoc flight logging, not created under trips, will be allowed to do it via this option. Most training items should be included via the Ad Hoc Flight Log. 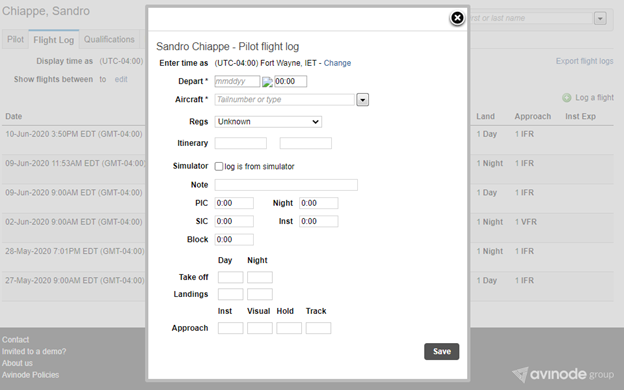 Enter Time As: This will allow the pilot to select the desired Time Zone before adding it into the system. Its recommended that the pilot has the correct default time settings under his user profile as well as the Schedaero Crew Application.

Depart The day of the flight and time.

Aircraft: Schedaero will populate different options, however, if the aircraft is not on the drop-down, the user can type any other aircraft, especially if it's in an ATD or FTD.

Itinerary: Pilot should input the Airport Departure and Airport Arrival.

Simulator: If the flying was conducted under an FAA-approved training device, the user is able to select this checkbox.

Note: Any additional text can be included here.

PIC: The times that were flown under Pilot in Command.

SIC: The times that were flown under Second in command.

Block: Whole duration of the flight.

Night: All flights that were conducted during night time.

Instrument: The time that was flown under Instrument Meteorological Conditions (IMC).

Day Takeoff and Landings: Takeoffs and landings recorded during the day.

Hold Any time the aircraft was under a holding pattern.